About a month ago I was home alone. Not by myself for the day. Not for the week. For a whole month. My family was in the UK and I had little to do, but program and work. So I started streaming.

I had been watching other developers stream and wanted to try my hand at it. So here's what I learned.

Most people find the hardest part of streaming is the setup. Well, it turns out I was not the exception. One of the most helpful resources I found on stream was Suz Hinton's My Twitch Live Coding Setup.

She walks you through setting up OBS Studio and the hardware she uses. I paid particular attention to how she talks about things instead of the specifics of her setup. For instance, she gives justifications for the different stream overlays she uses. It's a killer article. 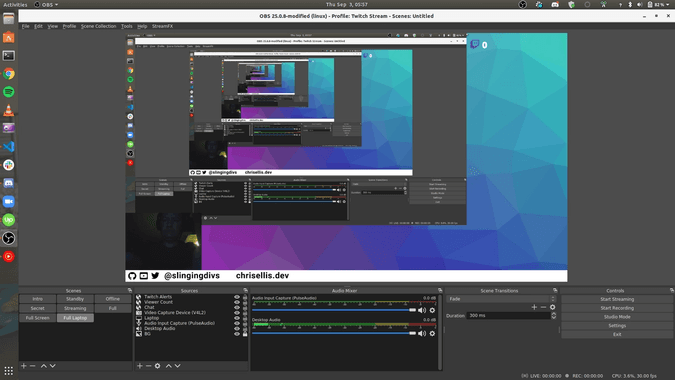 Something like my stream :D First off, you'll have to pardon two things, the infinite mirror, and my dark image. Everyone's asleep!

Notice the Sources on the bottom left. After adding a Scene this is where most of the magic happens. Well, some of it. OBS has a lot of magic.

That's what I'm working with. I've got other scenes setup, but once you've got a handle on the main driving scene, you can handle any of the others.

Streaming to Youtube didn't give me a lot of engagement. It was like yelling to the void. I'm sure that has to do with not having any followers, to begin with, and I've got some now. After talking to a bunch of streaming devs, most had said they preferred to Twitch. I must say, I agree.

Consistency is the key to getting engagement. Doing it daily made my engagement increase quickly. All my first streams were centered on my RedwoodJS demo project. I have about 10% left on that project and then it can be used. That last bit is always the hardest.

Announcing that your streaming and what you're doing also gets great engagement. I got more viewers by letting people know I was streaming, and then I got more followers on Twitter. It's a virtuous cycle.

Make a checklist of things to do before you stream. On my first stream, I went 30 minutes before I realized the issue with my microphone. There was terrible feedback and you couldn't hear what I said. Mic check 🎤.

You can filter out typing with some OBS magic. I don't have a fancy compressor or noise gate. My microphone helps, but there are some OBS settings that can help. I found this video helpful, but there's a ton of them on the Tube. Your settings will most definitely be different than another user's. Record without filters, then AB test them as you tweak. And satisfice.

Streaming has been really fun. I've talked to a bunch of other developers in the past month and it's a pretty tight night community. If you've ever thought about streaming I think you should try it.

That's all I've got today. I'm sure I'll learn more as I continue. If you've made it this far, I want to say thank you. You can follow me on Twitter or Twitch with the links at the bottom of screen. If you want to contact me, you can email me or DM me on Twitter.

Was anything I wrote confusing, outdated, or incorrect? Please let me know! Just write a few words below and I'll be sure to amend this post with your suggestions.